Things to do in Singapore if skyscrapers aren’t your thing

Singapore is a strange place. It’s like London’s Canary Wharf came over on holiday and never really left. And that trip over would date back to the late 90’s/early 2000s, because Singapore’s soundtrack is the boy bands of those eras.

Skyscrapers, big multi-lane roads with turning cars hassling you at traffic light crossings and fierce air con dominate this small country. But, if you bring your gaze downwards from the glowing signs of Raffles Place and J.P. Morgan, bustling around at street level are still pockets of traditional Asia that give a bit of soul to reflect back from the boundless amounts of glass.

Singapore is a place of juxtapositions. Old and new. Colour and minimalism. Heat and cold. And emerging blinking eyed from the sterile Chinatown MRT station (north east line) to an immediate confrontation with Chinatown itself is a brilliant example of that juxtaposition. It’s a riot of red and gold lanterns decorating numerous stalls selling you everything anyone who wishes they were actually in China could want to buy. Chopsticks (ornamental and tacky plastic chopsticks for beginners), jade jewellery, colourful fans, parchment decorated with Chinese calligraphy as well as the usual tourist tat that traps a few coins such as key-rings and postcards. Stalls selling food and that nose turner, durian infuse the place and buildings in the old colonial style with their colourful shutters frame the whole scene.

It’s a compact shopping destination but there is plenty to keep you occupied in the area for a few hours. If your feet get too tired browsing the stalls, for instance, there are a couple of Kenko spas dotted around the area. The description that Kenko is the McDonald’s of the spa world is rather unfair on the brand (even if it does highlight the point that Kenko is everywhere and anyone can walk in and get served from a menu of treatments). It smells a lot nicer, is a hell of a lot calmer and, while you may feel like your limbs are being systematically broken by the masseuse, it’s actually ultimately rather good for you.

For the culture vultures, there are also a couple of temples dotted about, adding to the riot of colour. And, more towards the other end of the culture spectrum, a shop dedicated entirely to Tintin. 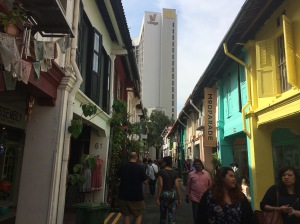 Small, narrow and if you’re of a rather Western build, the clothes sold here will be similarly restricting, but still fun to browse.

This colourful little lane is located around the corner from the packed, tacky hell that is Bugis village and provides a much needed respite. The colourful colonial style buildings beckon you in from the heat under their shady porches and through the ground floor doors or up the stairs to surprisingly deep boutiques selling clothes, accessories, homeware and art.

It’s not cheap, and a lot of the clothes are either Asian sizes  (i.e. tiny) or very colourful vintage that even Sienna Miller would have problems pulling off, but there are some gems to be found here and it’s all just a great feast for the eyes.

Plus, there’s a cat café around the corner. In case that swings the decision to go at all.

Ok, slightly mock traditional in it’s look, but the many colours and lights, bordering the quay at night make it a lovely antidote to the skyscrapers that tower behind it. Seeing Clarke Quay for the first time actually enabled me to warm more to Singapore.

Definitely head here for an evening of food, drink (bear in mind alcohol is stupidly expensive) and live music (which is available at several bars) for at least one evening while you’re in Singapore. Try and ignore how Hooters detracts from the charm. 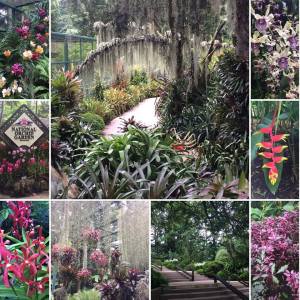 Singapore Botanic Gardens tends to feel a bit overlooked in comparison to the famous Gardens by the Bay. I didn’t have time to go to the latter while I was in Singapore, so I can’t judge on which is better, but I do know that if you miss greenery, the sight of people enjoying the outdoors and even some semblance of fresh air, Singapore Botanic Gardens is a good way of curing that longing.

The gardens overall are a lovely mix of open green spaces bordered with bamboo, jungle plants and trees representing the diversity of Asia’s plant life. If you’re lucky (or not, depending on opinion) you may casually bump into the occasional monitor lizard strolling around enjoying the scenery and presumably some insects too. And while we’re on the topic of animals, you almost certainly will walk into canines of various size and Britishness. There is something delightfully surreal about seeing a pair of yapping ex-pat corgis scuttling around trees that belong in a jungle and not on England’s green and pleasant land.

The star in this green crown though is the National Orchid Garden. You have to pay a small fee to enter this bit but the beautiful orchids more than deserve the parting of cash. Celebrity orchids, rare orchids, your bog-standard, still stunning, beautiful orchids populate this garden along with bromeliads and the odd carnivorous plant, enticing you to keep walking further on despite how weary you are. Your eyes will overrule your feet here.

(If you want to smell really fresh air, I highly suggest piling on the layers and heading into the ‘cold room’ – a greenhouse that is mocked up to simulate the climate of the mountain tops where certain orchids and carnivorous plants thrive. It’s definitely a welcome break for the lungs.)

Don’t forget to pay the gift shop a visit on the way out and invest in some gorgeously made kaya jam – this stuff on toast will make any morning worth getting up for.

It is utterly Singaporean perhaps, that the best way to see any wildlife is in one of the largest zoo complexes in the world. However, far from lacking soul, this place is as metaphorically full of life as it is physically full of hundreds of furry, scaley, and feathered lives.

Comprising of Singapore Zoo, the River Safari, the Night Safari and Jurong Bird Park, Singapore Zoo is in fact four zoos and can only all be done in one day by a very dedicated, fleet of foot person. Needless to say I did not even try. I instead went for an afternoon at the River Safari, followed by the Night Safari in the evening and found this one of the most enjoyable experiences to be had in Singapore.

The sheer scale and range of animals there means you aren’t just expected to be wowed by your bog standard giraffe or lion (not that I in anyway wish to dismiss those beautiful creatures, but they are a zoo staple). There are manatees, gharial crocodiles, giant river otters, clouded leopards, civets, flying squirrels and so much more.

And the zoo has not been lazy either in just hoping the animals themselves will carry the show. For example, the use of music in the River Safari to mirror the movement and temperament of the animals really added to the experience.

Meanwhile in the night safari, the lack of glass or metal bars around the land animals and the subtle placing of food made you feel as if you actually were on safari. Nothing prickles the hairs more than to suddenly burst out of a dimly lit path framed with high trees and bushes and encounter a pack of hyenas, silvery fur gleaming in the moonlight, a mere ditch away from you, noses in the air, on the lookout for food.

This is perhaps as wild as Singapore gets.