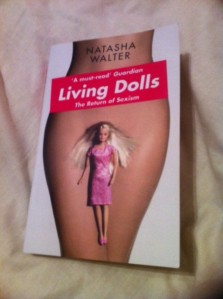 I am a feminist because I believe in women having equal opportunities to men. This concept of choice as a core principal of feminism has for me has caused me some trouble in the past, though. Namely, when faced with a barrage of media that shows (mostly young) women saying they have taken up pole dancing/glamour modelling/prostitution or any other job that involves pleasing men sexually of their own free will, for whatever reason (they enjoy it and/or its easy money) and that they feel empowered feminists for doing so.

Something to me just didn’t sit quite right. And I was worried, was I an old fashioned prude – of the killjoy-spinster-aunt-in-stories-of-old who-chaperoned-young-lovers ilk? Was I just being a snob and thinking that those weren’t valid career choices for any self-respecting woman?

Now I’m not a prude. (Although I generally have to restrain myself from hauling apart couples who are effectively dry humping each other in plain daylight in parks every summer – in fact the only reason I don’t is probably because I suspect it’s like that old rule, don’t come between fighting dogs, you’ll just lose something; use a broom handle or garden hose instead. And I’d just look weird wandering around Green Park with one of those.) Nor am I condemning anyone who does decide to make a career in the above professions – each to their own.

So what was bothering me? Well having started reading the excellent ‘Living Dolls’ by Natasha Walter, I’ve managed to pin down what caused that disquiet. My unease was about how much of a choice selling your body for money, by whatever means, actually is a choice. As in, what are the alternatives? Are we living in a society that encourages women in general, let alone women from a particularly under-privileged, socio-economic background, that the choice of any other career they want is truly open to them? And if not, does the decision to strip for money, which is becoming an increasingly normalised way for women to earn some kind of status, and which coincidentally plays nicely into what men want, count as a real choice?

In other words, have those girls, eager to strip off for a lads’ mag, been equally encouraged by society (and not just with PR-driven words, but actions by the people with power) that they could just as easily be a scientist or chief executive of a FTSE 100 company?

It’s hardly surprising that the allure of becoming the next Jordan grips many women, it seems to be the most realistic career option that society pushes at women. It sure as hell isn’t becoming the next head of Rothschilds or something else seen as typically high-powered and for men. Media coverage of women, the marketing aimed at girls and women etc, it’s all aimed at offering women the ‘choice’ of defining their worth by their body and how they can please men. Just look at Barbie, this awful Virgin Airways advert, at the Daily Mail sidebar of shame. Career choice for women is limited: society is trying to dress up the sexist objectification of women as choice.

Feminism is about choice – and the day I can celebrate that women are truly freely making a choice about whether to become an MP or a glamour model ain’t here yet.

PS – I REALLY recommend reading ‘Living Dolls’ by Natasha Walter. Everyone needs to read it.